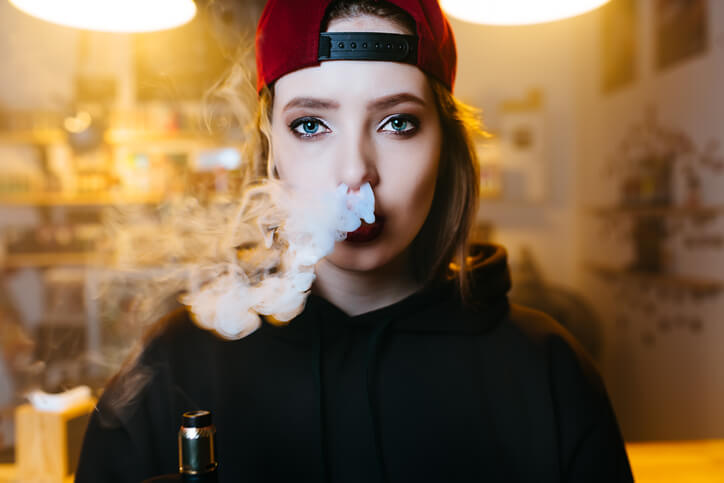 E-Cigarettes and Young People: What Respiratory Therapists Need to Know

As a healthcare professional working in respiratory therapist jobs, you’re in a unique position to help get the word out about the dangers of e-cigarettes. Maybe you don’t know the full extent of this danger or you’re not sure what you can do to keep kids from picking up and trying their first e-cig.

Use this guide to learn how to explain to kids and teens about vaping devices and how harmful they can be.

Visit Club Staffing to find travel respiratory therapists jobs and put your skills to work while spreading the word about the dangers of e-cigarettes.

What’s the deal with e-cigarettes?
E-cigarettes, also known as vaping devices or vapes, are battery-operated devices that heat up and vaporize liquid nicotine, creating an aerosol that’s inhaled. Just like smoking traditional cigarettes, the vapor inhaled contains nicotine, which is known to be harmful. Because e-cigarettes entered the marketplace in 2007, they’ve become very appealing to the younger generation, leading to a serious problem.

According to studies by the Federal Drug Administration (FDA) and the Centers for Disease Control (CDC),e-cigarettes surpassed traditional cigarettes as the most commonly used tobacco product among middle and high school students nationwide in 2014.

The American Association for Respiratory Care (AARC) notes that FDA/CDC findings attributed the increasing popularity of e-cigarettes to fruit and candy flavors that kids find appealing, and the design of the devices lets them use them discreetly, even at school.

California Healthline notes that the Juul e-cigarette — which resembles a flash drive, making it easier to sneak a puff right in the classroom — is especially popular among teens. These devices are easily recharged using a laptop USB port, come in colorful designs and feature nicotine pods in tasty flavors.

The odor produced is very subtle and easily mistaken for perfume, and the vapor dispersed is thin and dissipates quickly; making it difficult for teachers and school administrators to catch kids in the act.

The dangers of e-cigarettes
With more than 480,000 tobacco-related deaths annually, the FDA reiterates that tobacco use is the leading cause of disease and death that’s completely preventable. Nicotine in any form is harmful, including vaping.

You’ve likely seen the results in at least one of your respiratory therapist jobs because respiratory issues are common for smokers.

One CDC study warned about the dangers of tobacco use and addiction, which often starts young. Nicotine exposure during adolescence could have long lasting effects on brain development.

Emerging evidence also suggests that using e-cigs may be harmful to the lungs and be a gateway to long-term smoking for kids.

Respiratory therapist jobs and e-cig warnings
Many children have no idea there are dangerous chemicals at work and simply think it’s just flavored smoke. According to the National Institute on Drug Abuse, 66 percent of teens believe this, too.

Gloria Ayres, BS, RRT, AE-C, TTS, and member of the AARC, encourages respiratory therapists to get involved in spreading the word on the harmful effects of e-cigarettes and says the FDA’s new campaign to curb e-cigarette use can play a vital role.

“The Real Cost” was launched by the FDA to specifically target e-cigarette use in kids, including those already using tobacco products and at-risk kids between 12 and 17. The program emphasizes the risk of addiction, dangerous chemicals involved and numerous health consequences. Educate kids by talking to at-risk groups and ordering print materials to display and share.

As a healthcare professional, you not only help your patients, you educate them. Begin your journey to new respiratory therapist travel jobs by clicking the link below. Imagine the good you'll do with your new found knowledge on e-cigarettes and their dangers.